TIA (This is Africa)

Posted on December 3, 2014 by rememberthepoor

Bear one another’s burdens, and so fulfill the law of Christ. Galatians 6:2

Shared by Experito via Cindy May

TIA. This is Africa.  But it doesn’t have to be.

In a recent email, Experito shared 2 situations they encountered due to lack of decent transportation.  One of them could truly have been life-threatening.  As we prepare to build the school in Koch Goma, we will be looking at purchasing heavy-duty transportation, and also at improvements to some of the roadways (laying gravel for instance).  Experito’s personal vehicle is currently down-for-the-count, as well as Cyrus’s in Kisii.  Those are the first two items we plan to purchase.  Cindy

This rainy season has caused not simple challenges to our movements that, apart from my car getting stuck on the way for several days, it has been breaking down and causing inevitable costs to repair. There was a day the oil pump failed to work which affected the camshaft and the crankshaft. After repairing them it broke down again, such that we could only be towed.

It was night and I was rushing sick kids from the school to the hospital in Gulu.  We got a vehicle to tow us which also got stuck due to mud.  We remained in the place for two days with the sick kids, to arrive the following day at 2.00.a.m.

Recently, when Andrew and the team from Australia visited us, they had a bit of the rough nature of the seasonal roads. They even abandoned the car and they jumped on motor bikes, locally known as bodabodas.  A journey which would have taken 1 hour, took more than 10 hours!!!! 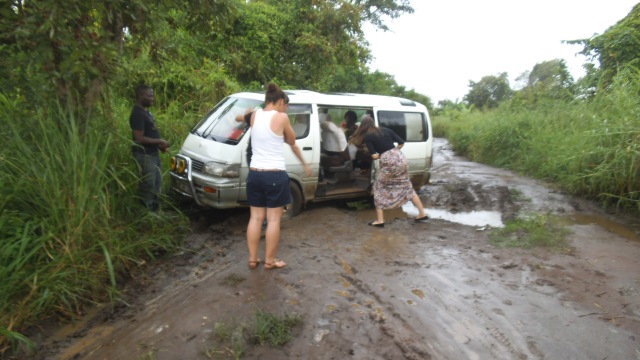 Note from Cindy:  Make sure you notice just how many people are on that motorcycle!

This entry was posted in Updates, Updates from Experito and tagged updates. Bookmark the permalink.