Life to the Fullest!

Posted on December 10, 2008 by rememberthepoor

A while back, we shared with you a post from Katie Davis’ blog.  She’s the 20-yr old young woman (19 when she wrote this post) who lives in Uganda mostly-full time and has, by the grace of God, become the mother of 10 orphaned little girls.

I have come that they may have life and have it to the full. John 10:10

And he died for all, that those who live might no longer live for themselves but for him who for their sake died and was raised. 2 Corinthians 5:15 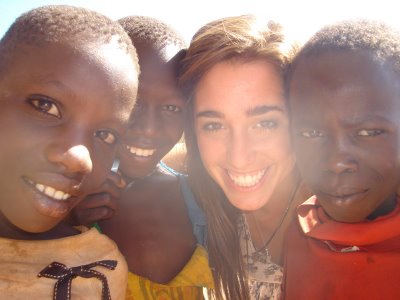 Katie with some of the kids

Last night there was a rat in my room. I really wanted to go to the bathroom, but when I heard his little feet scratching around, I literally couldn’t move. I was paralyzed with fear. Now, I’m usually a pretty fearless person and have been told so on many occasions. Why did this little mouse scare me so? I don’t know, but it led me to think about how often, as human beings, we are crippled by our fear. We are afraid of change, of losing, of being hurt. We cling tightly to what we have because we are afraid of what might happen if we didn’t have it anymore.

I read a story once:

Once there was a people who surveyed the resources of the world and said to each other: “How can we be sure that we will have enough in hard times? We want to survive whatever happens. Let us start collecting food, materials and knowledge so that we are safe and secure if a crisis occurs.” So they started hoarding. So much and so eagerly that the other peoples protested and said: “You have so much more than you need, while we don’t have enough to survive. Give us part of your wealth!” But the fearful hoarders said: “No, no we need to keep this in case of emergency, in case things go bad for us too, in case our lives are threatened.” But the others said: “We are dying now, please give us food and materials and knowledge to survive. We can’t wait… we are dying now!”

Then the fearful hoarders became even more fearful since they became afraid that the poor and hungry people would attack them. So they said to one another: “Let us build walls around our wealth so that no stranger can take it from us.” They started erecting walls so high that they could not even see anymore whether their enemies were outside the walls or not! As their fear increased they put bombs at the top of their walls so that nobody from outside would even dare to come close. But instead of feeling safe and secure behind their armed walls they found themselves trapped in the prison they had built with their own fear. They even became afraid of their own bombs, wondering if they might harm themselves more than their enemy. And gradually they realized that their fear of death had brought them closer to it. – Henri Nouwen

Katie taking children to be de-wormed (in Uganda)

Today you can choose to be like me and lay paralyzed in your bed, uncomfortably longing to go to the bathroom but unable to move because of your fear of something as small as a mouse. Or you can choose to take a risk – do something for someone… change someone’s world. LIFE TO THE FULLEST – it exists. The choice is yours.